These two letters were written by Charles Pike of Norway, during his service as a musician with Company B of the 29th Maine Volunteer Regiment during the Civil War. Pike was 37 years old and married with a family when he enlisted in January 1864. He married the former Esther Crockett in 1847 and they had three sons: Horace, born in 1849; Mark, born in 1852; and Dennis, born in 1856. Their home was on Paris Street, at the corner of Pike Avenue. 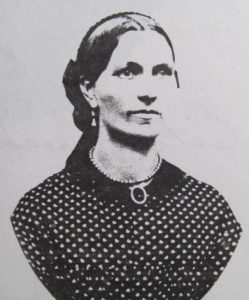 These letters are copied verbatim, with the exception of some punctuation added for clarity. They contain information that is both historic and touchingly personal. The soldier referred to as “Greenleaf” in the first letter was Andrew P. Greenleaf of Norway. He began his second tour of duty one month previous to Cedar Creek. It was his first battle.

The Battle of Cedar Creek took place near Strasburg, Virginia on October 19, 1864, when Confederate General Jubal Early staged an early morning attack that took the Union Army by complete surprise.

45 or 50 miles from Harpers Ferry in Camp how long we shall stop here I don’t know.

Dear Wife and Children I hope you are all well and remain so. I am as well as common but have a very bad cold. We have cold and rainey weather. The weather here is not much warmer than in Maine. We have had another grait battle here to Cedar Crick.  An afful Battle, our lost grait. They attacked us in the morning before light. They drove us back about two miles before we could get the advantage. They took 24 pieces of our artillery but at last we got the advantage of them and drove them back about 15 or 20 miles taking 4 or 5 thousand prisoners and 64 peaces of artillery. I saw 45 peaces of them all in a line before General Sheridans Head quarters most of them were rite from Richmond. We cut their army to peaces. I guess they wont try us on a gain this fall. I suppose you have heard the news about them that was killed. Greenleaf was killed he was the first man killed in the Reg. he was shot in the back of the head. He probably didn’t know what hurt him. I saw where he fell and where he bled. He is berried within 20 rods of where we are now. If she wants to get him home she had better send soon. We lost killed and wounded about 140 men out of our Reg. you will probably here of the rest that was killed and wounded without my writing. I wrote to you about being in Washington. That was the talk then about wherever should I go. I don’t know but I guess not down to Lewisania. I have not sent that money yet because I have not had any chance but I think I shall have a chance in a few days. Its rather dangerous in sending money on account of the gerillas. We shall probably be paid off again within a month or so. I don’t want you to suffer for anything. When you get your money start saving a cent. If I don’t come home this winter you have you some good bed clothes and keep warm. I wish I could be with you. I would give well its no use saying but I hope I shall live to be with you all and make you all happy. I don’t get much time to write but probley I shall have more by and by. I should like to have some of your victuals you used to cook for me. I’d give a good deal it is one thing over and over here but there’s no use in wishing as I no of. We have no potatoes here and I want some awffley but they don’t raise many out here. What they do are small. Dear Horace and Mark I want you to be good boys to poor mother and try to help a long all you can. You must remember Horace you are a man now and you can help her almost as much as I can. If you think so I guess you have been a good boy since I have been gone and you must be a good boy to poor mother. This winter if I should not get home you know she can’t stand the cold like you can. I was real glad to have you write to me Horace and I hope you will often and I write to you as soon as I get time. Little Mark and Dennis I think of you both everyday of my life if I could see you I would hug and kiss you both so as it would hurt you. When I can have a chance to send you something, I will. So keep up good courage and I will write to you again in a few days. Write to me if it ain’t but a word. From you Father and Friend C. Pike

After the Civil War ended in April 1865, Union troops occupied the former Confederacy as part of Reconstruction.

Dear Wife and Children I still remain here to darlington and am well as common and I hope those few lines will find you all the same. I don’t expect to stay here to darlington a grait while. The quartermaster department is a going to move down to Florence in a few days. I can’t tell you any thing a bout when we shall come home as yet but probley not until spring but I hope we shall next month. They say we shant git paid off until we are mustered out of the serves and I hope it will be soon for it is lonsome out here. We had a real sletey storm here last night and this monning the tress were covered with ice and it rains to day. We suffer more with cold here than we should to home but I have got me a bed fixed up so as I lay quite comfortable nights. I find that my boots is very much needed out here. There is not much of a chance for me to ern much monney here for the boys have not got any monney now but if we are paid off soon there will a chance to git some. I bought a mink skin yesterday for a small sum that I send to. Is not a very large one but it’s a very good one and you sell it for what you can git. The boys here thinks that I was foolish for comeing back a gain some times I think so myself but it may be all for the best but if any of you are sick you let me know it and will come home forth with. I hope that Horace will be a good boy this winter and I presume he will be and little Dennis & Mark to for I want you all to be good Boys to Mother and when I come home Horace you shall come to Portland to meet me. Write as soon as you can.

Yours With Respect C. Pike

Charles Pike was discharged from service in April 1866, due to disease. He returned to his family at their home on Paris Street and resumed his work as a carpenter and builder. Charles Pike died in 1893 and is buried in Pine Grove Cemetery.