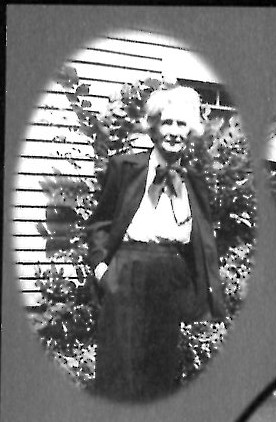 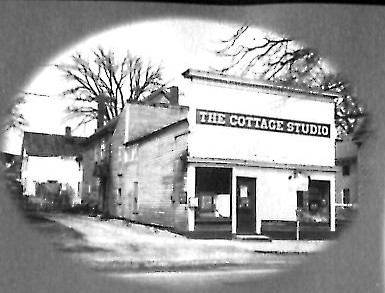 The Cottage Studio, Minnie’s long-time business location, on Cottage Street, Norway. The building was located immediately behind the current Key Bank. This photo was taken just before the property was purchased and demolished by the bank, circa 1954

Just who was Miss Libby?

To get to know Miss Libby a bit better, and to gain some insight into what she meant to our community, here are a few excerpts from a retrospective the late Harry Walker, the Norway historian and Advertiser Democrat columnist, penned for BitterSweet magazine in June, 1981:

She came to town and she took the town. And the town loved being taken, for the way she “took” the inhabitants was with her big, imposing studio camera.

And it’s safe to say that we considered her a character. Why did we? Well, most unusual—and to many people shocking—Miss Libby wore pants. Men’s knee pants. Knickers, we called them, and they were part of her habitual attire. We doubt that as an adult person she ever appeared on the streets of Norway wearing a dress or a skirt.

With her pants she wore a man’s shirt, a flowing bow tie, knee-length stockings, and comfortable brown shoes. Her brown hair was always tousled and kept rather short and she walked with a hint of a swagger in her gait.  In short, Minnie Libby was a liberated woman, a woman ahead of her time. A free soul.  She was always “Miss” Libby and that’s apparently just what she wanted to be. Never did we hear of her being romanced by a suitor and she certainly didn’t dress to attract the opposite sex. But love is many things and her life was not without it. She was very devoted to her parents and they to her, and she was very close with Vivian Akers . . [whom she] photographed from the time he was a baby until he was a gray-haired successful artist. We feel that Miss Libby considered him as the beloved son she would never have.

Miss Libby’s top recognition came in 1941 when an issue of Life Magazine devoted two and a half pages to her and some of her photos, featuring her as a noteworthy small-town photographer.  The most important oil painting she ever did is, no doubt, the one that has hung for decades in the lobby of the Mark Hopkins Hotel in San Francisco. Mr. Hopkins, so we’ve been told, was a Greenwood boy who’d made good in the hotel business, but couldn’t get over being a bit homesick for his home town. So he asked Miss Libby to paint a certain Greenwood scene for him, and she complied.

Miss Libby left us a legacy of which we can all be proud: thousands of interesting studio photos of our ancestors and other people of the past of this area, plus hundreds of tinted photos of flowers and country scenes and scores of water-colors and oils.

We don’t know what’s on her [grave] stone, but the inscription should say: “Here lies a free soul and a true artist, one who loved humanity and nature beyond compare.” 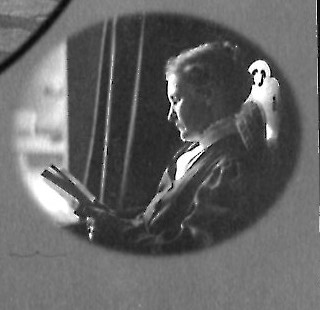 Self portrait with book, date unknown 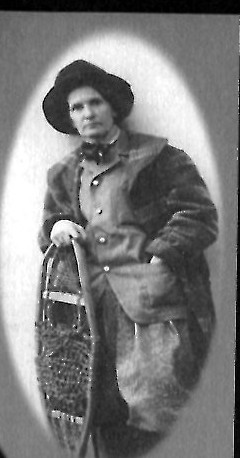 Minnie with snowshoes, believed to have been taken by Vivian Akers, circa 1943

From Miss Libby’s obituary in the Advertiser-Democrat April 1947:

Miss Libby, born at Waterford, July 29, 1863, was the daughter of Hiram and Margaret Kimball Libby. The family settled at Norway where her father became a well-known carriage maker and iron worker.  After finishing her education in the local schools she studied in the Boston Museum of Fine Arts, and after graduating soon became a prize winner in an arts display there.

Miss Libby returned to Norway and entered the photographic studio of J.U.P. Burnham and learned retouching along with sensitizing dry plates and silvering paper.  In 1885 she opened her own studio on Deering Street and soon became one of the leading photographers in the section. At the World’s Fair in Chicago she took many stereopticon slides, also secured local scenes the basis for a number of lectures.

About 1907 she bought the Cottage Studio which she operated continuously for forty years. Not all her best work was done in the studio as she had a keen appreciation of the natural beauties of the outdoors and her camera caught many scenes in the White Mountains and around the shores of Lake Pennesseewassee.

Painting in oils was a hobby and many canvases show the wide range of her talent that could reproduce flowers, field and wood scenes along with mountain and lake subjects.

For years Miss Libby has been a teacher in the Universalist Sunday School.  She was the oldest person in business in town, and was the last in a long list of traders and business people who flourished before the disastrous fire in 1894 and subsequent years. 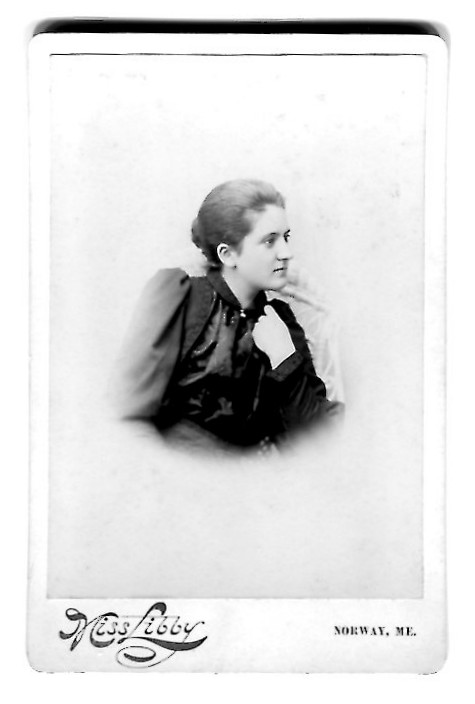 Cabinet card from the studio of Miss Libby. Portrait of Manta Tracy, 1893 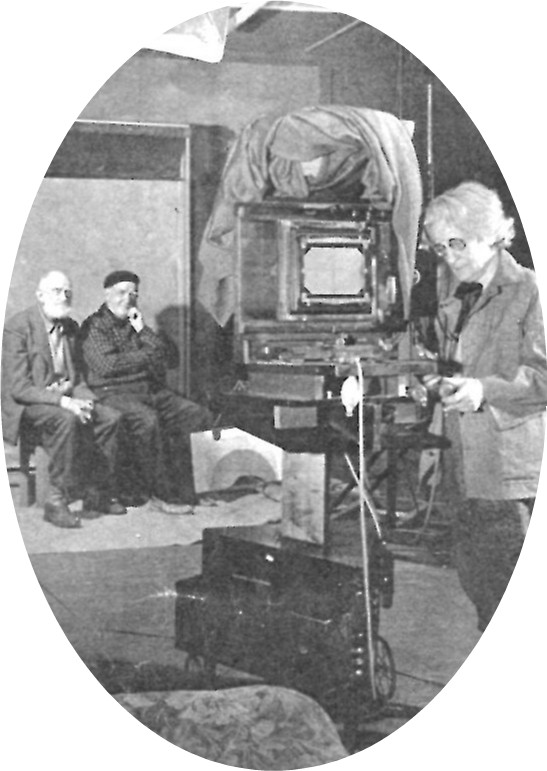